Read what our athletes and parents think about training at lazer cheer!...

Joining Lazer Cheer Academy has been the most amazing, life changing and positive experience for our family. 4 short years ago we had never heard of competitive cheerleading, stumbling across the team by chance and thought we would give it a go as it looked fun.
Since then Jess has grown from a reserved, shy and anxious 10 year old to a confident, dedicated and out-going teen.
She has learnt so many skills from a round off in her first season to a double in her fourth but the skills on the mat narrow in comparison to the life skills she has learnt thanks to the encouragement and commitment of the coaching staff at Lazer.
This year we travelled to Atlanta to compete at Cheersport - the team were crowned National Champions in their division - not long ago this was only a dream and now it has come true.
Jess has also been given the opportunity to further her skills as a Junior Coach, assisting with the younger athletes in the gym and at local schools.
I can’t wait for the seasons to come to watch her blossom into a young adult with her friends and coaches by her side; learning, laughing and loving life together. Bring on Season 13 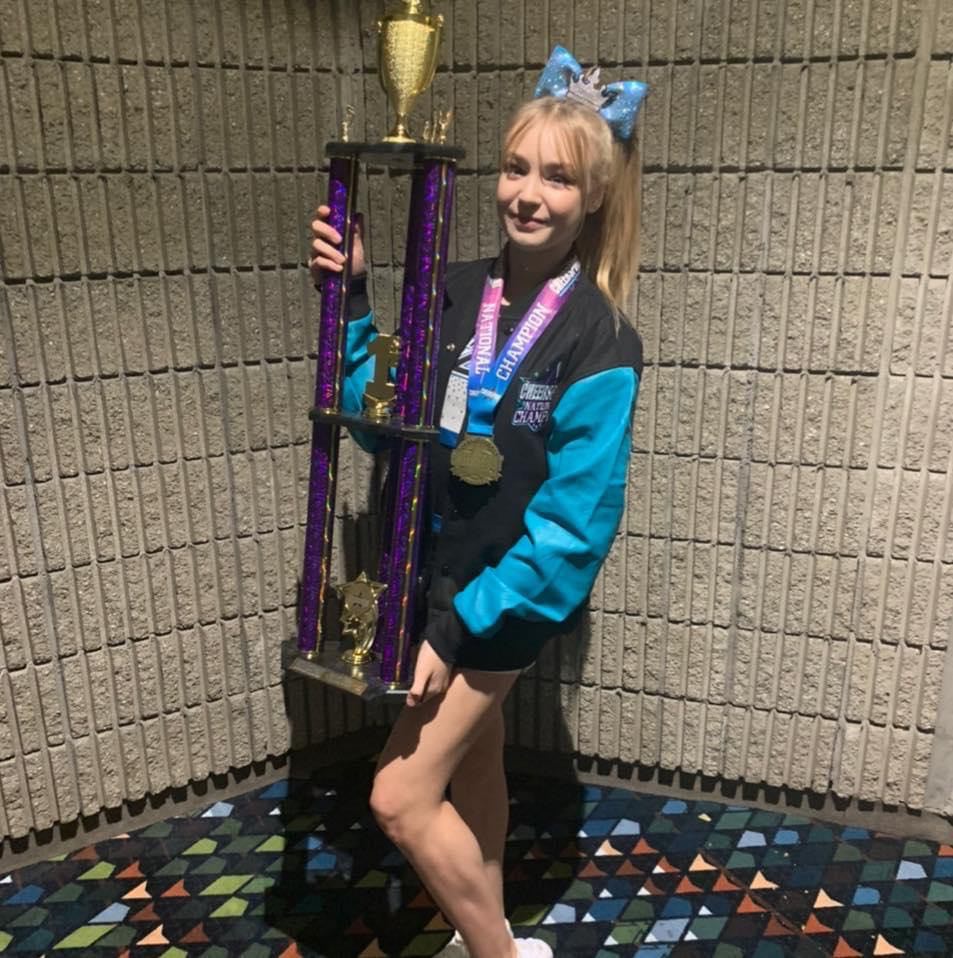 Allowing Lacey and Sienna to join Lazer Cheer Academy has most definitely been the best decision I have made as a mum. Being a military family, it all started with a posting to the area. It has given both girls a focus whilst their Dad has been on operational tours and as both being shy children it has been fantastic for their confidence. Both girls have achieved so much in their 4 seasons at cheer from barely being able to cartwheel to tucks and fulls. The highlight of our cheer journey so far has to be when Lacey took to the mat at Cheersport with Lazer Royalty where they became national champions! I will be forever grateful to the time and effort the coaching team has put into both my girls and I can't wait to see what the rest of their cheer journey has instore for them. 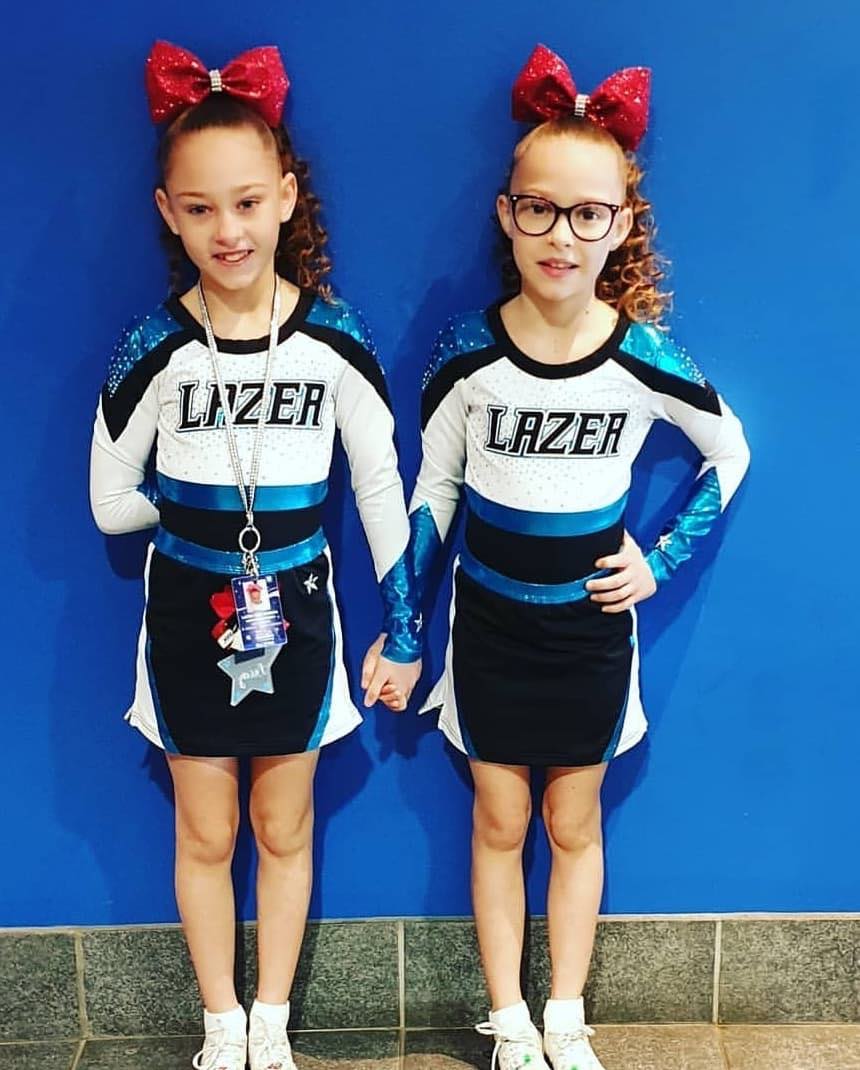 Finding Lazer Cheer Academy is honestly one of the best things that has happened to Eva. She joined as a scared 7-year-old little girl with no confidence and has never looked back. Since that day, her confidence has grown, and she has just blossomed. Not only does Lazer Cheer keep her extremely fit and healthy, it has also given her some incredible skills that she could have only dreamed of. Yes, she has worked hard but it is only through the positive encouragement and skills of the coaches that she has managed to grow and accomplish all she has. She has gained some lifelong friends in her teammates, who support each other and are some of the loveliest people you will meet. Her brother joined this season and he instantly loved every second, beaming with pride at his first competition. Cheer is not just for girls, I have seen the Lazer boys grow into incredible young athletes and from Liam’s perspective, he will have better ninja skills when he can do his tuck like his sister! We feel honoured to be part of the Lazer cheer family and look forward to our future together. 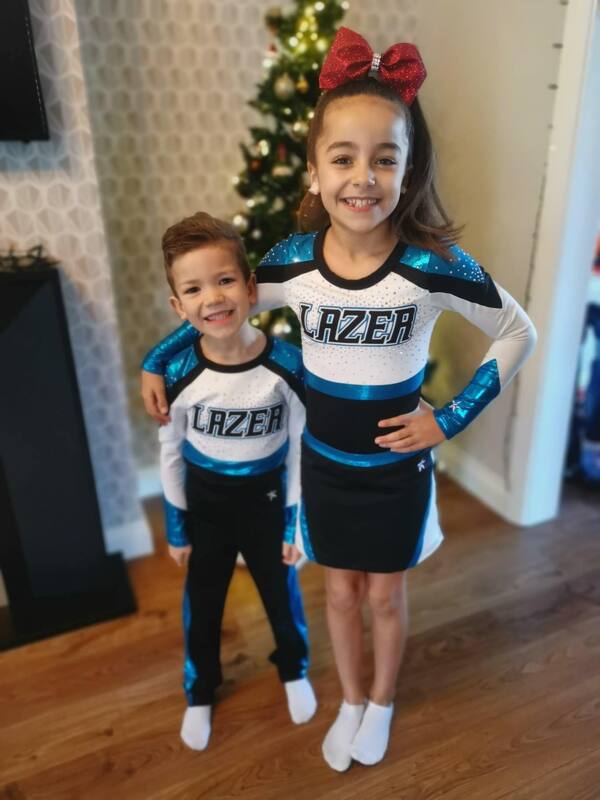 I’m in a very special position to be able to write about the amazing sport and wonderful club that is Lazer Cheer Academy from the point of view of a parent of not just 3 girl cheerleaders but the mam of a male cheerleader and also being an athlete myself. My clan joined Lazer Cheer in season 2, my then 3 year old little girl and 5 year old little boy joined together. They were hooked from the first session, 2 years later their 3 year old little sister joined in. I felt left out sitting on the sidelines so we pestered the coach to let the mamas have a go that was 2012. We added another another Lazer athlete to our clan in 2014 and she joined Lazer Limes in 2018. I could talk for hours of all the experiences my clan has had with Lazer Cheer Academy, but I’ll pick out my highlights for each of us. Logan, now 15 year old, earned himself a spot on a level 3 senior team and level 4 stunt group, he has for many years been the only boy on his squads, but a credit to the athletes and coaches he has never been made to feel different and always accepted as part of the squad. Jessie, now 13, recently (Feb 2020) competed in and won the championship title of CheerSport International Junior level 1 in Atlanta. Paigie, now 9, is so shy and reserved, but she has found her place with her squad and due to her wonderful coaches steps out onto the big blue mat in front of huge crowds (1000’s of people) and performs with a genuine smile on her face, she loved watching and meeting the England squad. Hannah the youngest of our clan, has followed in her siblings footsteps and has competed as a Lazer Lime for 2 seasons now. She has overcome nerves and her confidence and skills continue to grow. My Gold squad became Champion of Champions in 2019, but for me the best thing about being part of Lazers is all the friends we have made. Cheer is an amazing sport, and with the fantastic coaching team at Lazers, it not only keeps you physically but mentally fit and healthy, it teaches all the athletes young and old, about commitment, responsibility, accountability, working hard for something. That it’s ok to fall as your squad will help pick you up just as you will be there to pick them up, how to push yourself to achieve your individual and squad goals. That you always support and applaud your competition. As a parent, I love that this sport is teaching my children some very imported to life skills. I love that this sport is all inclusive. We can go to one competition and not only can we watch young and older athlete compete but male and females squads not only compete against each other but on the same squads together. My son and daughter have competed on the same squads for many years, there are not many sports where brothers and sisters can be on the same team! My clan can’t thank the coaching team enough for all the opportunities that have been given to us. We are here to stay, we ARE Lazers all the way! 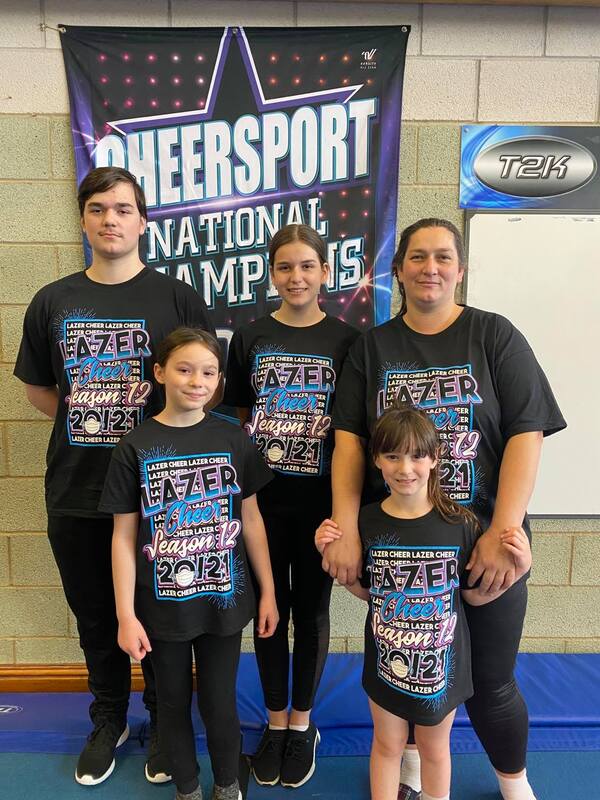